Just days after Disneyland has reopened with an update to its Snow White attraction, the move is already receiving backlash.

According to Disney, Snow White’s Enchanted Wish takes guests aboard a wooden mine cart as they accompany the princess as she escapes the clutches of the Evil Queen.

“Begin your fairytale journey in the cozy cottage of the Seven Dwarfs, then visit dazzling mines filled with glowing gems. Soon you’ll be riding into the Queen’s sorcery chamber and discovering a magic mirror just as Snow White bites into a poisoned apple!,” a description on the theme park’s website reads. “When all looks lost, will Snow White find her own happily ever after?”

The ride is enhanced with new music, LED back lighting, laser projections, an animation system, and new scenes, including Snow White dancing and the evil Queen’s collection of spell books and bubbling potions.

“The Snow White attraction has such a rich history,” Kim Irvine, creative executive for Disneyland Resort and Walt Disney Imagineering, said in a statement. “We wanted to take into account the beautiful scenic work that has always existed and retell the story in a special way. We believe guests will enjoy this sweet storyline in a stunning experience.”

However, it’s the “true love’s kiss” grand finale between Snow White and her prince that is drawing scrutiny from the San Francisco Gate. 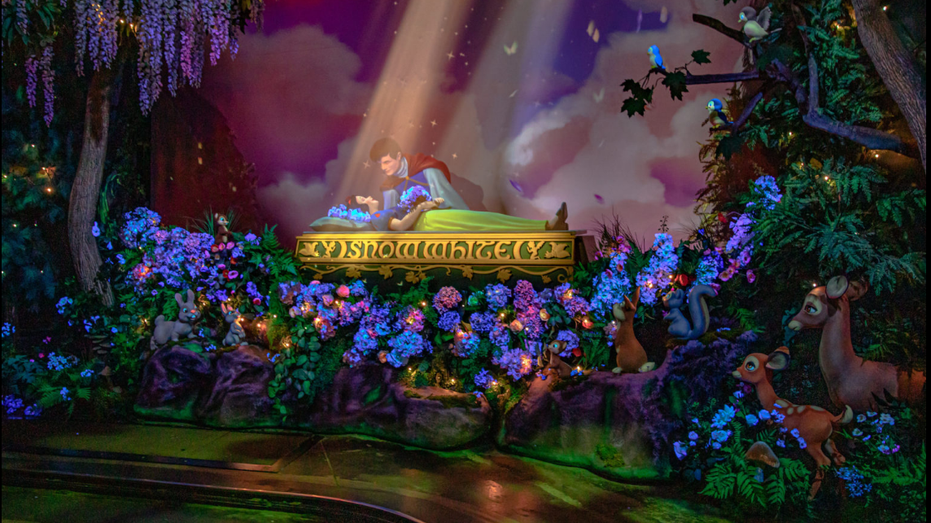 Snow White’s Enchanted Wish, an original Disneyland attraction, has undergone a magical reimagination for the ultimate storybook ending of “happily ever after.” (Christian Thompson/Disneyland Resort)

“The new grand finale of Snow White’s Enchanted Wish is the moment when the Prince finds Snow White asleep under the Evil Queen’s spell and gives her “true love’s kiss” to release her from the enchantment,” the outlet writes. “A kiss he gives to her without her consent, while she’s asleep, which cannot possibly be true love if only one person knows it’s happening.”

“Haven’t we already agreed that consent in early Disney movies is a major issue? That teaching kids that kissing, when it hasn’t been established if both parties are willing to engage, is not OK?,” The San Francisco Gate continues. “It’s hard to understand why the Disneyland of 2021 would choose to add a scene with such old fashioned ideas of what a man is allowed to do to a woman, especially given the company’s current emphasis on removing problematic scenes from rides like Jungle Cruise and Splash Mountain. Why not re-imagine an ending in keeping with the spirit of the movie and Snow White’s place in the Disney canon, but that avoids this problem?”

Snow White is the latest Disney theme park attraction to stir controversy, following backlash for “negative depictions” of indigenous people in scenes on The Jungle Cruise attraction and for the Splash Mountain attraction’s ties to the 1946 film “Song of the South”.

The company announced earlier this year that it would redesign The Jungle Cruise to replace the scenes in question and was praised for its decision to re-theme Splash Mountain after the 2009 animated film “The Princess and the Frog”, which features a Black female lead.

In addition to its theme parks, the company’s streaming service, Disney+, added “offensive content” disclaimers to select episodes of The Muppets and films including The Aristocats, Dumbo, Peter Pan, and Swiss Family Robinson.

A Disneyland spokesperson did not immediately return FOX Business’ request for comment on the San Francisco Gate’s report.