At least one person was unaccounted for and eight others were injured early Thursday following an explosion and massive two-alarm fire at a paint factory in Columbus, Ohio, according to reports.

The fire prompted area evacuations and sent firefighters scrambling to get the blaze under control, officials said.

Those injured included five people who were taken to hospitals after escaping the building on their own, the Columbus Division of Fire said in a statement.

However, two people were trapped inside the building and had to be rescued. They were in critical condition, officials said.

“Search and rescue efforts are continuing, as are extinguishment efforts at this time,” the statement added.

Fire Chief Steve Martin said hazmat crews were on the scene because the plant is home to dangerous materials, Columbus’s WBNS-TV reported. He added that evacuations were underway at nearby businesses. 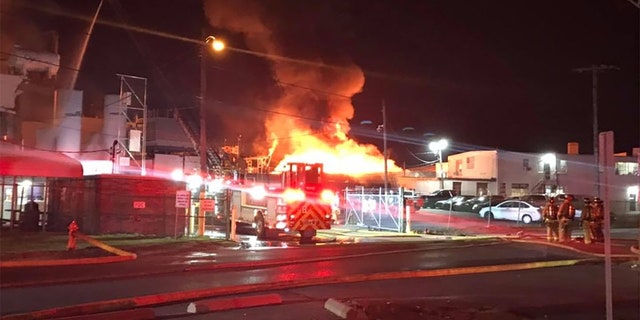 The scene early Thursday at the Yenkin-Majestic Paints plant in Columbus, Ohio.
(Columbus Division of Fire)

Local residents posting on Twitter said they felt the blast in the homes.

“Powerful enough to shake my whole house,” one resident wrote.

“Something blew up in Columbus,” another replied.

“It was all over the city, I think,” another wrote. “I’m in central Columbus, by fairgrounds. We heard a ‘muffled’ explosion-like sound and whole house shook, windows rattled. All the neighbors came out of their houses, our dog ran upstairs to see what was happening, etc.”

Photos taken by residents showed a large plume of smoke rising into the sky.

The cause of the explosion wasn’t immediately clear.