The White House on Wednesday defended Vice President Kamala Harris‘ travel, as she faces scrutiny for not having visited the overwhelmed southern border, amid her latest assignment from President Biden to handle the “root causes” of the surge in migration in recent months.

White House press secretary Jen Psaki on Wednesday during the press briefing was asked about the vice president’s recent travel to Chicago, as opposed to the southern border. While in the Windy City, Harris visited a local bakery.

According to the pool note, Harris said her favorite is German chocolate and gets it for her birthday each year, and her staff had preordered a slice for her.

“I would say the vice president was visiting Chicago to talk about COVID and the importance of communities getting the vaccine when it is available and accessible to them,” Psaki explained. “While she was there, like many Americans, she got a snack. I think she’s allowed to do that.”

Harris, according to officials from the vice president’s office last week, will lead “diplomatic efforts to engage Mexico and the Northern Triangle to address the root causes of migration and to oversee the flow and use of US aid.”

“This is an issue she remains committed to,” Psaki said, maintaining that “the Northern Triangle is not the same as the border.” 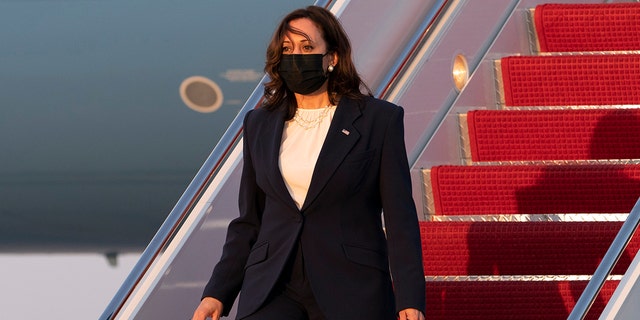 “They are all related, but addressing the Northern Triangle is working with these countries in the region on how we can address issues like drought, hurricanes, etcetera,” Psaki said. “That is what she is focused on.”

Psaki added that she has “no update on her travel,” as questions remain about when the vice president will visit the border.

KAMALA HARRIS PLEDGED TO VISIT BORDER ‘AT SOME POINT,’ BUT TWO WEEKS LATER WHITE HOUSE HAS NO UPDATE

“I think as, you know, working with countries to work on a collaborative approach, to working on circumstances on the ground,” Psaki replied, adding that the vice president is “trying to work to determine how we can get to the root causes to disincentivize migration.”

Psaki was asked about whether there could be “tangible success” on Harris’ assignment. Psaki explained that Harris’ role is “about addressing these causes over the long term,” and will focus on “rushes to the border.”

Meanwhile, earlier this week, Harris was in California, where she visited small businesses and a water treatment plant as she touted the administration’s proposed infrastructure package.  That visit drew criticism from Republicans for ignoring the border, while in a border state.

Also earlier this week, Arizona Attorney General Mark Brnovich wrote to Harris, urging her to visit to the border and inviting her on a trip to the area with him.

Harris’ travel comes as she is leading the administration’s “diplomatic effort and work” with nations to “enhance migration enforcement” at their borders.

The White House later clarified that Harris wasn’t involved with the “border crisis,” but was instead focused on addressing the “root causes — not the border.”

The Biden administration has been facing a continuing border crisis, with a migrant surge that has led to images of migrant children packed at over-capacity facilities and families being released into the U.S.