White House press secretary Jen Psaki was pressed Tuesday about the Biden administration’s taking credit for a partnership between Johnson & Johnson and Merck to scale up production of the Johnson & Johnson coronavirus vaccine.

The Johnson & Johnson vaccine received emergency use authorization in late February after taking part in the Trump administration’s Operation Warp Speed. Psaki announced Tuesday that the federal government would invoke the Defense Production Act to assist Johnson & Johnson and Merck.

“We wrote our first story at The New York Times about a possible partnership between Merck and [Johnson & Johnson] for manufacturing on Jan. 21,” a reporter said to Psaki during Tuesday’s press briefing.

“My understanding is that talks between those companies have been in the works … could you help explain how it is that the Biden administration deserves credit for bringing these two together when it looks like the discussions had been under way before you guys got here?” 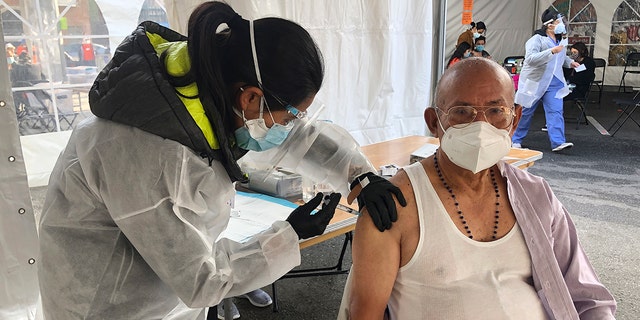 Psaki responded that she was “talking about when [the partnership] was finalized so that we could move it forward.”

“Of course, there are conversations between companies, but in terms of getting it to a point, and obviously the Johnson & Johnson vaccine was only approved last weekend, right?” she said.

“But there’s a difference between conversations and it moving forward and the use of the Defense Production Act, which is something this president, and not the prior president, committed to invoking,” Psaki continued.

“Also, the commitment to help upgrade, help get the manufacturing facilities to the place where they needed to be in order to produce the vaccines. So I’m only conveying what got it across the finish line. And I think it’s clear that that has only happened relatively recently,” she added.

Earlier in the briefing, Psaki said that Johnson & Johnson was behind in manufacturing but that the Biden administration took action so that “we will have more than enough doses to vaccinate the American people.”

All U.S. adults will be able to receive a coronavirus vaccine by the end of May, President Biden said on Tuesday.