Kathryn Limbaugh, the widow of conservative talk radio icon Rush Limbaugh, is speaking out about the funeral that was held in her husband’s honor and her future plans.

Rush Limbaugh was laid to rest on Feb. 24 in St. Louis, where a small private ceremony was held. The 70-year-old Limbuagh died Feb. 17 due to complications from lung cancer.

Appearing on his namesake radio show on Tuesday, Kathryn Limbaugh updated listeners about how she’s been coping with her husband’s passing.

“It’s a difficult time but I’m OK and we will make it through together,” Limbaugh told guest host Todd Herman.

“We called the day of his passing as ‘the event’ to make it a little lighter. We planned the memorial service for a year. Rush laughed at the coming event. The sun was shining brightly at the Missouri funeral home, not like the icy snow a week before.”

“Rush was just shy of a president in my view,” Kathryn added. “There will be pictures of the horse-drawn carriage with us following behind. We had a short ceremony in their chapel to his favorite song. We then went down to the burial site. We prayed around Rush and played some of his favorite music. It was absolutely stunning with a beautiful oak tree over Rush with the sun shining down on him.” 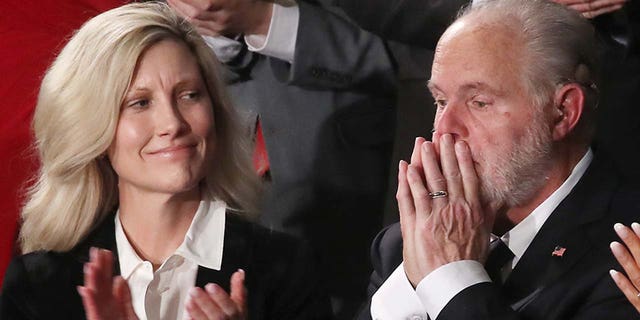 Kathryn then shed light on what her plans were going forward.

“I will continue the Rush Revere books and audio,” Limbaugh said. “To keep the movement alive, just think of what Rush would say and do. I have his wedding ring and a cross on a chain around my neck, keeping him with me every day, every moment. Rush didn’t know after which EIB Show he would follow God’s plan to return to Heaven. He went peacefully. Yes, he was greeted by many when he arrived back home.”

Limbaugh added to Herman, “I will be back on EIB as often as you want me to be.”

Rush Limbaugh learned he had Stage IV lung cancer in January 2020 and was awarded the Presidential Medal of Freedom by President Donald Trump at the State of the Union address days later. First lady Melania Trump presented America’s highest civilian honor to Limbaugh in the House viewing gallery.

“Rush Limbaugh: Thank you for your decades of tireless devotion to our country,” President Trump said during the address.

Limbaugh is considered one of the most influential media figures in American history and has played a consequential role in conservative politics since “The Rush Limbaugh Show” began in 1988. Perched behind his Golden EIB (Excellence in Broadcasting) Microphone, Limbaugh spent over three decades as arguably both the most beloved and polarizing person in American media.