An air base in Iraq that hosts U.S., Iraqi and coalition troops was targeted Wednesday as multiple rockets struck the facility, according to a report.

At least 10 rockets struck the Ain al-Asad base, located in western Anbar province, at 7:20 a.m., The Associated Press reported.

No casualties were immediately reported, according to Reuters.

The base was the same one targeted last February in an attack that left about 100 troops with head injuries, Bloomberg News reported.

Iraqi forces were leading the investigation into the attack, Col. Wayne Marotto, a U.S. military spokesman, wrote on Twitter.

US LAUNCHES AIRSTRIKE AGAINST IRANIAN-BACKED FORCES IN SYRIA 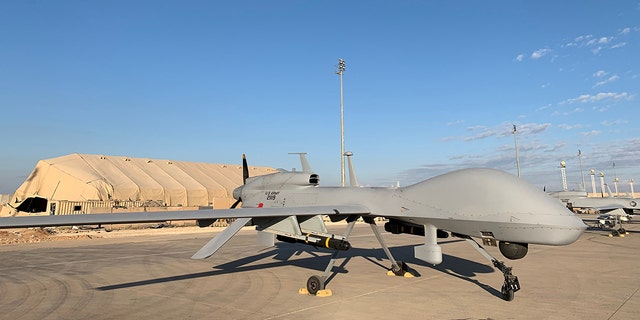 U.S. Army drones are seen at the Ain al-Asad airbase in the western Iraqi province of Anbar, Jan. 13, 2020. (Getty Images)

The U.S. strikes were in response to rocket fire that targeted American presence in the region. That rocket fire killed a coalition contractor from the Philippines outside an airport in Irbil, in northern Iraq, the AP reported.

U.S. officials described the Biden-ordered response as “proportionate” to the preceding rocket fire.

The source of Tuesday’s rocket fire was not immediately known.

The rocket fire also came as Pope Francis planned a historic visit to Iraq for later this week that would make him the first pontiff to ever visit the country.

The Associated Press contributed to this story.