New York State Assemblyman Ron Kim – who said Gov. Andrew Cuomo threatened to ruin his career for speaking out against his mishandling of the nursing home crisis during the coronavirus pandemic – is now calling for Cuomo to face impeachment.

“Cuomo abused his powers to hide life and death information from the Department of Justice that prevented lawmakers from legislating – like fully repealing corporate immunity for nursing homes. That is an impeachable offense,” Kim wrote on Twitter on Monday.

“The only way to protect the integrity of the co-equal branch of the state government, AKA the ‘People’s House,’ is to start impeachment,” he wrote in another tweet.

The New York State Assembly can vote to impeach a governor by a simple majority, sending the case to the State Senate for trial. Unlike the U.S. Constitution, New York’s state Constitution does not include specific guardrails to define impeachable conduct, according to PIX11.

Kim, a Democrat who is also the chair of the state’s Standing Committee on Aging, previously accused Cuomo of “abusing his power” by trying to pressure lawmakers into backing admissions by his top aide that the administration purposely withheld data on nursing home deaths from Justice Department investigators. 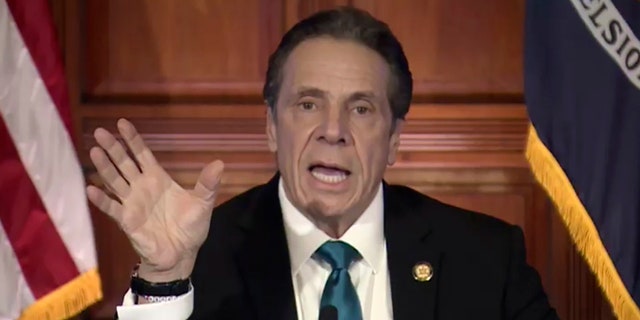 Melissa DeRosa, secretary to the governor, made the stunning revelation during a Zoom call with state legislators earlier this month.

Kim was one of more than a dozen Democratic lawmakers in New York pushing for Cuomo to be stripped of the executive powers that were granted to him throughout the pandemic.

Cuomo made a public appearance at a mass vaccination site at Medgar Evers College in New York City on Monday morning. He was joined by a handful of New York State Assembly members but did not address the nursing home deaths or take questions. Cuomo blamed the Trump administration for a lack of coronavirus vaccines and accused the former administration of creating mistrust around the vaccine in the Black community.

Despite Cuomo’s efforts to chalk up the drama-filled weeks to partisan politics, as questions swirling around his handling of the pandemic continue, the administration was forced to admit recently that nursing home deaths had topped 15,000 – nearly 10,000 more than was originally reported by the state at the end of January

New York City Mayor Bill de Blasio, who has long had a tense relationship with Cuomo, called for a full investigation into coronavirus nursing home deaths on Monday.

“I have not spoken to [Cuomo]. No, I do not accept his explanation,” de Blasio said during a press conference. “There needs to be a full investigation … we need to get the whole truth and make sure nothing like this ever happens ever again.”