Portland Mayor Ted Wheeler on Wednesday was booed, heckled and known as a “fascist” by rioters within the metropolis as he tried to attend a “listening session” about ongoing unrest — changing into the most recent liberal mayor to be shunned by protesters with whom they’d sought to indicate solidarity.

Wheeler, who for weeks has been backing the protests in opposition to efforts by federal regulation enforcement to cease rioting close to federal property, joined protesters at fencing close to the Hatfield Courthouse and tried to conduct a “listening session” — and was even hit by tear fuel deployed by federal brokers.

Nevertheless, whereas some protesters had been receptive to his presence, many others heckled and booed him, objecting to his refusal to again a few of their calls for reminiscent of abolishing the police, and for the Portland Police’s (for which he’s a commissioner) use of tear fuel and different strategies to close down riots.

“F— Ted Wheeler,” one protester shouted, in response to video posted by a reporter. “He doesn’t get to speak, he’s a f—ing fascist. F— Ted Wheeler.”

At one other level, a stressed crowd included a protester calling him a “f—ing a–hole” whereas others chanted “Tear gas Ted has got to go.”

Later, when he stated he wouldn’t decide to abolishing the Portland police, the gang booed, yelled “f— you” and instructed him to “get the f— out” and warned ominously: “Your house next.”

New York Instances correspondent Mike Baker, who recorded most of the scenes on digital camera, reported that as Wheeler suffered the consequences of tear fuel, one protester requested “How does it feel, Teddy?” Baker reported that others threw bottles and different objects at Wheeler. 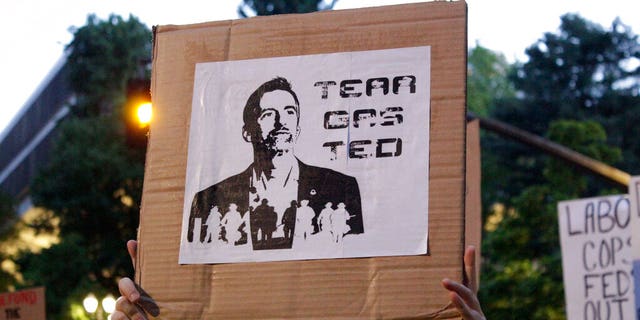 Scenes devolved and Wheeler was later shuttled to a constructing by his safety crew, who needed to scuffle with protesters who bought in Wheeler’s face, yelled expletives and kicked on the door, which his safety crew could possibly be seen on video struggling to shut.

“F— you. F—ing p—ies,” members of the gang yelled, in video posted by Baker, after one other member yelled, “See you tomorrow night, huh?”

However Wheeler isn’t the one mayor to have confronted a backlash from protesters, regardless of their sympathies towards them.

Minneapolis’ Democratic Mayor Jacob Frey was booed out of a protest in June after refusing to again calls to defund the Minneapolis Police Division.

Frey joined those demonstrating within the wake of the loss of life of George Floyd, who died in police custody, and ended up challenged by protest leaders about whether or not he would assist abolishing or defunding the police.

He instructed them he has “been coming to grips with my very own brokenness on this state of affairs” and promised to revamp “a systemic racist system.” He stated the “police union must be put as an alternative” with police practices reworked.

However as protesters grew agitated at his reply, the unidentified chief demanded a “sure or no” reply, saying: “We do not need no extra police.”

“I don’t assist the total abolition of the Minneapolis Police Division,” Frey stated, in video posted online from the scene.

“Go home Jacob, go home,” the demonstrators yelled on the mayor, as others booed and chanted “Shame, shame, shame.”

New York Metropolis Mayor Invoice de Blasio is thought for his left-wing leanings, and has backed and acted on calls to partially defund and drastically reform the police.

However at a George Floyd rally in June, he was booed off stage and had protesters flip their backs on him as he tried to talk.

“F— the mayor’s curfew!” some shouted, in response to The New York Post.

The heckling was so intense, the Put up reported, the mayor stored his look quick after which was not seen on the stage.

“Black lives matter in New York,” the mayor stated at one level.

“Not to you!” one heckler responded.